This is my first post, and i'm sorry to say its not the best news. I upgraded to the Note 9 in November last year. It was a simple ugrade process by EE and everything has been fine until last week.

I arrived home from work, and in a dark room I noticed an issue with the screen. Initially i thought it was something within the twitter app (not that i had realised before) but then it appeared on everything and it was a yellow / green box in the secreen. My first thought was that it was a app that hadn't closed properly, restarted the phone, then a hard reset and it was still there. I searched the internet and found a couple of things on forums (xda) regarding the same issue. They say this is screen burn, but the actual pattern doesn't match to the layout of my apps and then it was mentioned that it was an issue with the internals.

I contacted Samung via the members app and explained the issue and they confirmed i had an issue and I was to call in to the local Samsung Experience shop. I thought i would call first to confirm they would be able to fix. So one unhelpful call later, they had never heard of the issue and said that if they found any issues with the phone that were from my doing (wet / heat) they would not fix and charge me £25 for the privilage. I always have had a screen protector and a skin / case on this phone. I then thought I would contact EE, so I went to my local store and they couldn't be more helpful. They arranged for the phone to go for repair and ensured me this would be sorted! Kudos EE (Dean @ Huddersfield).

I wanted to know if anyone else had seen anything similar with their phones and had they had the fix?

I did read on xda of an EE customer having the same issue and had it sent off and came back the same. I have contact SBE (EE's selected repair company) to ensure they knew the issue and that it is fixed. As this is an expensive phone and I pay quite a high contract price I want to ensure i get the best use I can.

Solved! See the answer below or view the solution in context.

So, I have now had the phone looked at and the report returned from SBE. The problem is now fixed and ready to return. The outline of the report is as follows -

What you told us : The device's screen was faulty / corrupted.

What we found : Faulty Battery

Outcome of your repair : During our tests we uncovered an issue on your device and have now fixed this. It is a slightly different fault to the one you initially described, but if two problems occur on a device they are often connected, so you should find the initial issue has also stopped.

So it sounds like the battery was the fault, but this also effects the screen. I am no looking forward to having my Note back

I have a Note 9 and haven't had this issue, or with my other Samsung devices. Samsung said it wasn't screen burn but wet/heat? I've not come accross that problem before.

Welcome to the community and thanks for posting.

Although it's disappointing to read that you've had a problem with your phone, it's nice to read that Dean from the store was able to help you send it off for repair.

I hope you have it back and working fully soon.

Hi @Northerner, the customer service at the Samsung store where insinuating that I had dropped, over heated or emersed it in water below the limits advised. I can catagorically say this is not what has happened. This is a £1000+ mobile and take great pride in my handsets.

As you can see from the photo, this is something internal to the phone. 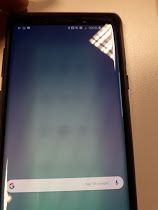 He was a credit to EE @Christopher_G

I will be returning to the store to purchase the Samsung smart watch when my phone returns.

Looks like the screen is dead and it should be something Samsung replace. What annoys me is that it would cost Samsung nothing to replace the screen for you, especially given the retail price for this device and brand image you would think they would have just fixed it. I like Samsung have all their kit, but their CS and customer aftercare is rubbish.

I hope you get it sorted as its an amazing device.

Come back and let us know when EE have looked at it.

I have a screen burn on my S8+ its Google Maps that did it, not that the app is defective but I use my phone for a sat nav so when I drove the 10+ hours up to the Isle of Harris/Lewis that icons on google maps was on my phone in the same place the entire journey. Its hardly noticable so I have lived with it.

I would contact Samsung again they should be replacing that under warranty.

@Northerner the screen worked fine, but had that in the background. I personally don't believe it is the screen, it's something from the internals that seems to be imprinted on the screen (rumours were that it had something to do with heat and glue). I know, it was the attitude of the Samsung worker that pushed me to go to EE.

I'm a little annoyed as I handed the phone in Wednesday and as of today it hadn't made it back to SBE. Hopefully arrive tomorrow and I get some feedback. I have emailed them directly to ensure it's fixed as on XDA someone on EE had their's returned for the same issue and arrived back exactly the same.

@BrendonH i have heard of Note 8's and S9 / 9+'s having screen burn issues. I don't think mine is as it doesn't align with any of my apps on either the home screen or the app drawer.

I will keep you all updated

Thank you for keeping us updated, be sure to let us know the outcome from the repair centre @Rickscottflynn.

If you have any further questions in the meantime please do not hesitate to come back to the community.

Thanks @Katie_B, I will continue to feedback.

One thing I would like to bottom out is the return of the phone to SBE. I handed the phone am on the 23rd and as of today it is still in transit. Is this included in the 2 weeks (average) lead time for repair?

The phone has arrived at SBE this morning, so hopefully it won't be long.

So, I have now had the phone looked at and the report returned from SBE. The problem is now fixed and ready to return. The outline of the report is as follows -

What you told us : The device's screen was faulty / corrupted.

What we found : Faulty Battery

Outcome of your repair : During our tests we uncovered an issue on your device and have now fixed this. It is a slightly different fault to the one you initially described, but if two problems occur on a device they are often connected, so you should find the initial issue has also stopped.

So it sounds like the battery was the fault, but this also effects the screen. I am no looking forward to having my Note back

See here. This looks like the problem you also have. Get back in touch will Samsung.

SBE are a Samsung approved service centre, so should you ever need Samsung to repair it in the future you will be covered.

@Colourzen thanks for the info. That's good to know 👍

Phone collected from EE Hudds this afternoon. Feels like a brand new phone.

Thanks for the update @Rickscottflynn

I'm happy to hear it's been repaired successfully.

Thanks @James_B. All seems to be spot on now and no early reoccurrences of the issue.

Can't find what you're looking for?

One of these options may help you find the answers you need.